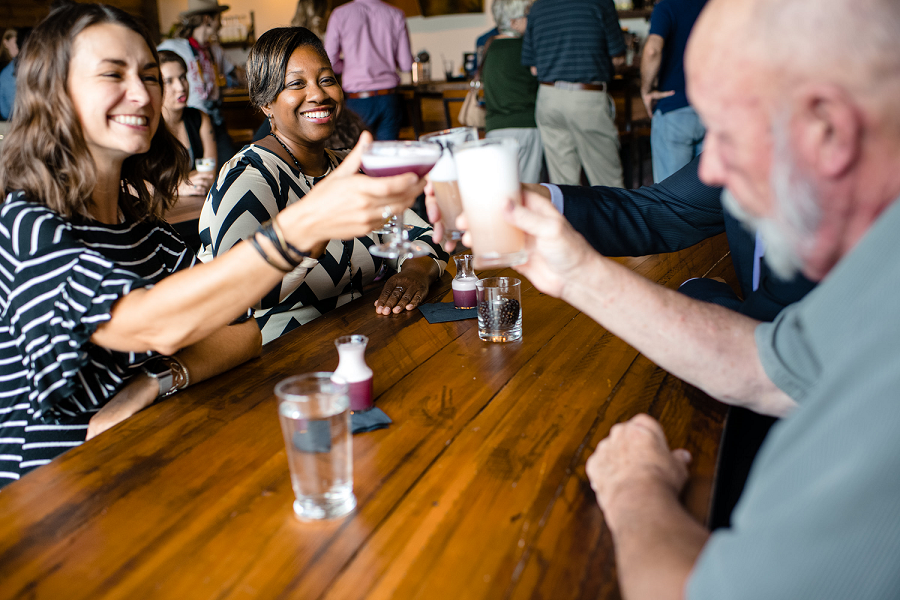 As places like State Line use grains grown nearby, they're modeling what it takes to link spirits directly to the land "grain to glass", demonstrating the worth of this pursuit, and carving a path for others to follow.

State Line Distillery and Cocktail Lounge is a grain to glass enterprise in Madison, Wisconsin. Founder John Mleziva intentionally sought a space in the heart of town that could be both a production facility and place for people to gather. Visibly linking the product with the process was important, and that’s why there’s a window between the cocktail lounge and the stills that frames the work, and invites questions and conversations.

State Line opened in 2017, starting with John and Mark Anunson working together on the production side along with the help of Bar Manager Mike McDonald, building out an inviting cocktail lounge. Now, 17 people are on staff including distiller, Danielle Leoni, and production assistant Elista Fisher. The cocktail lounge hosts game and trivia nights, and has a cocktail program that highlights their own spirits. John hosts tours of the operations, sometimes in a top hat and tails!

“The opportunity of being grain to glass is to incorporate the terroir of Wisconsin, and build a portfolio that has a distinct flavor profile,” said John. Doing so—starting with the grain instead of sourcing spirits—is a more time intensive process, he notes, even before the aging (which can take seven years or more!). However, the outcome is a product that is uniquely Wisconsin.

There are various approaches to making spirits, even within the field of craft distilling. There’s not one way to distill, and makers can step into the process from sourcing grain or create blends with ready-made spirits. At State Line all the spirits are made onsite starting with grains sourced primarily from local farms. John learned how to distill in Scotland, earning a MS degree in Brewing and Distilling from Heriot-Watt University; his intense study of traditional methods influenced State Line’s approach to producing spirits.

Food and beverage manufacturers already have a lot on their plate, and adding local grain sourcing takes commitment. Finding goods that are not traveling through the larger supply chain often means a lot of legwork just to identify potential sources. John credits Gil Williams, previously of Lonesome Stone Milling, for helping him meet farmers, and AGC for creating a structure that helps businesses step out of logistically simpler and more inexpensive choices. State Line is currently in the process of installing a mill they purchased from Lonesome Stone so they can mill on site, on demand in the future.

Initially, State Line sourced much of their grain and malt from Briess, a Wisconsin malt manufacturer, one of two industrial scale facilities in the nation. Now, all of the wheat they use in production is locally grown and sourced. They’ve made relationships with other farmers for additional grains in hopes of continuing to source materials as locally to the distillery as possible.

And it’s not just about markets for farmers; creating spirits with a regional footprint distinguishes their products. “It’s been interesting and educational to meet with farmers and close the loops where we can at the top of the supply chain,” said John. “Having a direct line to local farmers has always been our goal.”

Meeting the people who are working with grains at the farm level is exciting, as is learning how they’re growing it. The relationship matters—that they can talk about a flavor profile they are looking for, and have farmers suggest a specific type of grain is a rewarding part of the collaborative process. Read more about State Line’s unique flavors and creations in the November 2021 Edible Madison article, written by brewer Jessica Jones of AGC member Giant Jones.

Such ventures parallel farm to table restaurants, and are not common. Each one is a key ingredient in making more possible. As places like State Line use grains grown nearby, they are modeling what it takes to link spirits directly to the land "grain to glass", demonstrating the worth of this pursuit, and carving a path for others to follow.