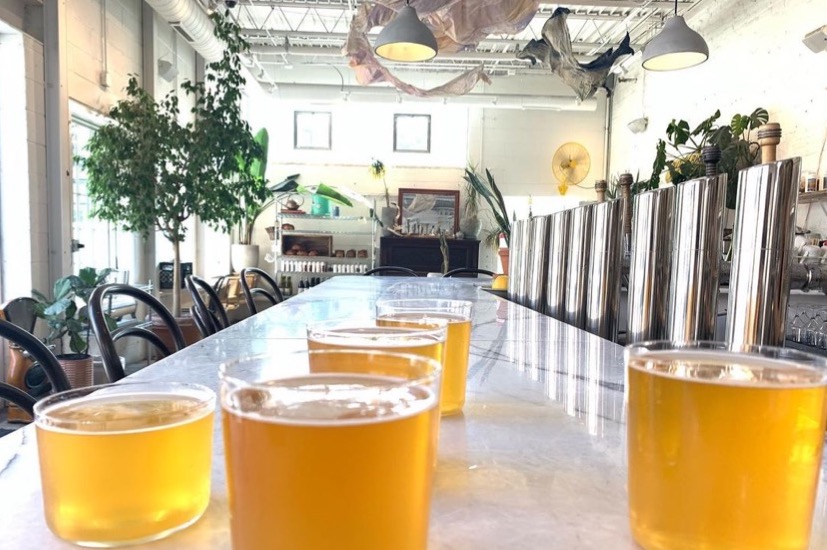 Middle Brow began as a philanthropic brewery, donating most-to-all of what they earned to social justice groups. In 2017, they landed in Chicago's Logan Square, then opened Bungalow in 2019 with the addition of a bakery and pizza oven.

Middle Brow Brewery and Bungalow lend Chicago’s Logan Square a center for grain exploitation, in the best sense of the word. The brewery boasts a pizza oven and bread bakery that regularly convert Midwest grains into food and beverages, and fun follows. The patio seats up to 100, and indoors holds another 100 guests.

“Weekends, people are scattered around the pavilions, sitting on tree stumps, leaning on the fence at the sidewalk. Live music might be happening on the back of the lot, and something entirely different at the front of the lot,” said co-founder Pete Ternes. The inside has skylights crowning 14-foot ceilings and the walls are decorated farm-style, with objects from his grandparents’ place, as well as from the grandparents of his wife and work partner, Polly Nevins. Pictured here: Pete at left with Polly, and co-owner Bryan at right.

This eclectic assembly of products and people suggests a goal of social fermentation for the fermentation-forward enterprise. Give people good food and drink, give them benches and fire pits outside, a rustic, light and airy setting inside, and they’ll find a way to make their own good times. A similar sense of experiment was at the root of Middle Brow when it began in 2010: what additional good could they create along with their craft food and drink?

“I was working on a food version of what the brewery became, organizing food events to raise money for hunger prevention organizations,” said Pete. At the time, he was living in New York, working as a lawyer. “One of my best friends reached out asking me to do a similar thing with beer. It was strange that we were sort of thinking about very similar things at the exact same time.”

Pete decided to move home to Chicago and join his longtime friend Bryan Grohnke; Grohnke remains a business partner, and is now in charge of the beer brewing and winemaking operations. Middle Brow also makes kombucha and other beverages, like barley tea.

For seven years, the two ran Middle Brow as a philanthropic brewery, donating most-to-all of what they earned to social justice groups. Around 2017, they started pursuing a steady location for the brewery, and landed in Logan Square. As they constructed the space, they considered what else it should include, and realized that pizza could be a good complement. Baker Jess Galli was in Chicago, toting skills and a fresh-flour compass from San Francisco; she helped them build out their pizza program, and start the bakery when Bungalow opened in 2019. Jess saw Middle Brow through the first year of the pandemic, and Marissa Venturi now manages the bakery, which includes wholesale operations, and is housed offsite just a couple of blocks away from the main digs.

The kinds of beer Middle Brow prefers to make are sour, brewed like their bread, with wild yeast. These are not malt-forward brews, but after a time, they wanted to root their brewing in Midwest grains anyway. Their quest for malt involved tracing down 100 different possible sources in Indiana, Michigan and Illinois. So many places were closed. “It was hard to find anyone who was able to make the scale of what we needed,” Pete said, but eventually they found Sugar Creek Malt in Indiana, a farm-based malthouse.

During the malt quest, Pete also found AGC. The network has been invaluable, he said, a formal shape for the kind of integrated food system the business is individually fostering. Primarily, they use flour from AGC member Meadowlark Community Mill, as well as some from Janie’s Mill, plus a little from Spence Farm in central Illinois.

Weathering the last two years has meant lots of reconfigurations. In March 2020, as soon as stay-at-home orders occurred, they had to cease a culinary training program they’d established in their first year. “We launched an apprenticeship program to teach local youth how to work in a restaurant and manufacturing facility, and in general, how to hold a job. We had a social worker on staff,” Pete said, but needing to control the flow of people in the kitchen put an end to that.

They also gave away a lot of bread—over 15,000 loaves so far to various groups: immigrant and refugee communities, centers that support trans youth, and Assata’s Daughters, a neighborhood mutual aid network on the mid-south side of Chicago. Another thing Middle Brow did was to invite the many farmers they work with to come and sell at their patio. Pete says it felt great to help businesses so linked to their own in this way during such a complicated time.

Relationships within the Chicago foodshed are vital to Middle Brow. When farmer/maltster Caleb Michalke brings over malt from Sugar Creek every two weeks, he hangs out on the patio— this is reciprocated when Pete, Polly and Bryan visit the Indiana farm. “When we needed fruit wood for a DIY Norwegian smoker project, we reached out to a Western Michigan farm friend and asked if they had any deadwood we could come get,” said Pete. The kindling is an object and a metaphor, signifying the links they, and AGC celebrate. That wood, for instance, also smoked beans from AGC member Granor Farm. When author Abra Berens’ cookbook launched last summer, of course it was at Middle Brow: a nexus for the spider webbing that ties such food and beverage makers together in the Midwest.

We invite you to share this story, and stay in touch with the links below.