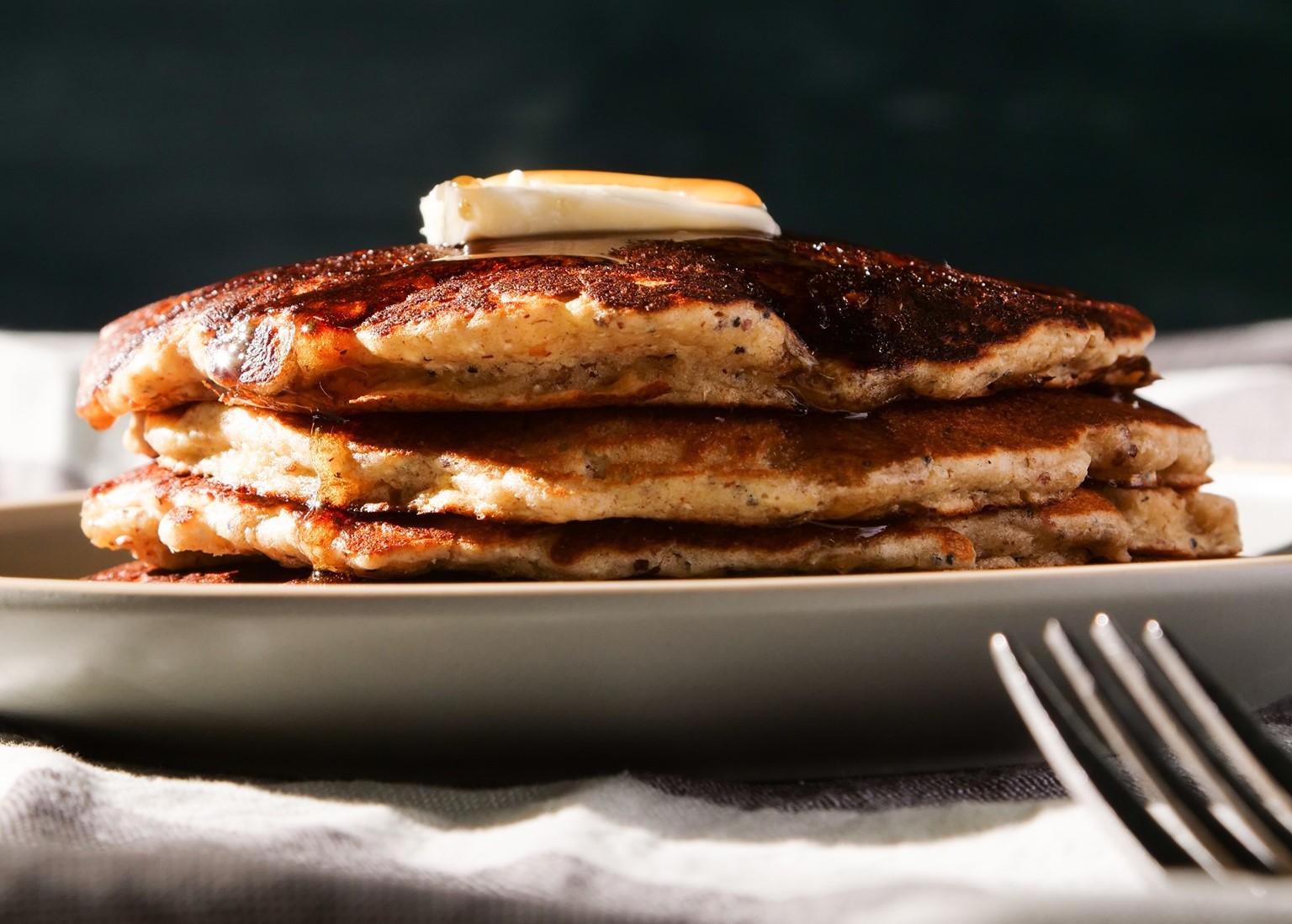 The name Long Table comes from Samuel’s vision of food that goes back generations, and forward, too.

Wanting to impress a fellow acrobat, Samuel Taylor became obsessed with making her pancakes. They needed to be light as cake but sturdy enough to keep the performer fueled. He fiddled with ingredients and methods, and the project paid off: the acrobat liked his breakfast, and they fell in love. Mission accomplished, but by no means over.

People encouraged Samuel to make a mix: a friend offered to design the packaging, another a website, and his mom volunteered to handle the paperwork. Starting with $5,000 and a stainless steel whisk, Long Table Pancakes began in 2017, premiering at farmers markets in Chicago, home base for the professionally trained Shakespearean actor.

Initially, Samuel flipped pancakes as a side gig, accumulating a million flips as he made hundreds of tiny pancakes to give away as samples each day. The business really bloomed during the pandemic, growth that came from necessity, and hard work. “The world fell apart, and my whole other line of work in the theater disappeared overnight. I thought, what would happen if I tried to really go full time at pancakes?” Samuel said.

Sales have doubled twice since March 2020, growth that was not possible from a farmers’ market stall four days a week. Selling direct was a great opportunity to help people understand that a pancake could translate to supporting regenerative agriculture, but selling at scale—and the resulting increase in demand for sustainably-produced grain—required the switch to grocery channels. “The grocery store game is tough, and your competition is backed by venture capital. As a result, there's not really a gradual path to success anymore in that industry,” Samuel said. Instead, his road to growth lies in making clear to investors and consumers that this company’s potential is dovetailed with the values of soil health and the wellbeing of rural communities.

Samuel’s given a lot of consideration to grains in the time he’s been focused on pancakes. He started with jars and jars of grains and flours, and studied them closely for how they worked, in the batter, on the griddle, and in his body. In the midst of this research, he encountered Gilbert Williams, of the former Lonesome Stone Milling in Lone Rock. “I had an acting job in Wisconsin at American Players Theater, so I rode my bike out to the mill, met Gil, and he gave me a 20-minute education that changed my whole understanding of flour and grains,” Samuel said.

Samuel began to appreciate why stone-ground grains—full of bran, germ and endosperm—were so much more flavorful. He started developing a nose for what flours and grains contributed to a batch, noticing what heirloom varieties tasted like versus standard grains that were conventionally milled. “There was just no comparison at all, in terms of the differences in texture and flavor, and more anecdotally, in terms of how full and sustained I felt during acrobatics. I began to evangelize about heirloom grains and stone milling.”

Ninety percent of the grains in Long Table mixes now come from farmers he knows. Currently, he has a part-time employee helping him make small batches, and he hopes to grow into using a contract manufacturer also known as a co-packer. Doing so is a big jump, requiring thousands of units to reach the co-packer’s minimum run. There’s no middle ground between that and hand-mixing in a food-grade concrete mixer—not without investing in costly mixing and bagging equipment, plus the many other expenses of running a food processing facility.

Samuel says he values the work AGC does for this emerging industry, letting the network get to know itself and connect. He finds that the renaissance happening in regional grains feels like a somewhat underground movement, and is glad to be in on the secret. Last year, Samuel became fast friends with fellow AGC member farmer and Teffola founder Claire Smith—they had a lot in common as producers of consumer packaged goods that use identity-preserved grains. Together, the two took a virtual business accelerator class run by AGC member Family Farmed, and also teamed up to co-create the Grain Views & Habits survey that AGC ran last summer. (Stay tuned for round two later this year!)

“It’s only a matter of time before people have a better understanding of what's happened to commodity grain production in the past 100 years, and why maybe the resulting ingredients haven't been as healthy for people as they could be.”

The name Long Table comes from Samuel’s vision of food that goes back generations, and forward, too. The last hundred-plus years of farming and food processing, he said, have nearly erased the hard work that was done to hand down good food from one end of the table to us. He’s working now to ensure his kids and grandkids have a place at the figurative table on this planet.

“Pancakes are a front for my agriculture and economic reform agenda. Every act of eating is a small act of support for a certain kind of farming. And that farming has a huge impact on the world that is being created for generations to come,” said Samuel with verve.

AGC is grateful to have such a committed spirit aboard. To learn more about and stay connected with Long Table Pancakes, check out this fun Fooditor article and the links below.