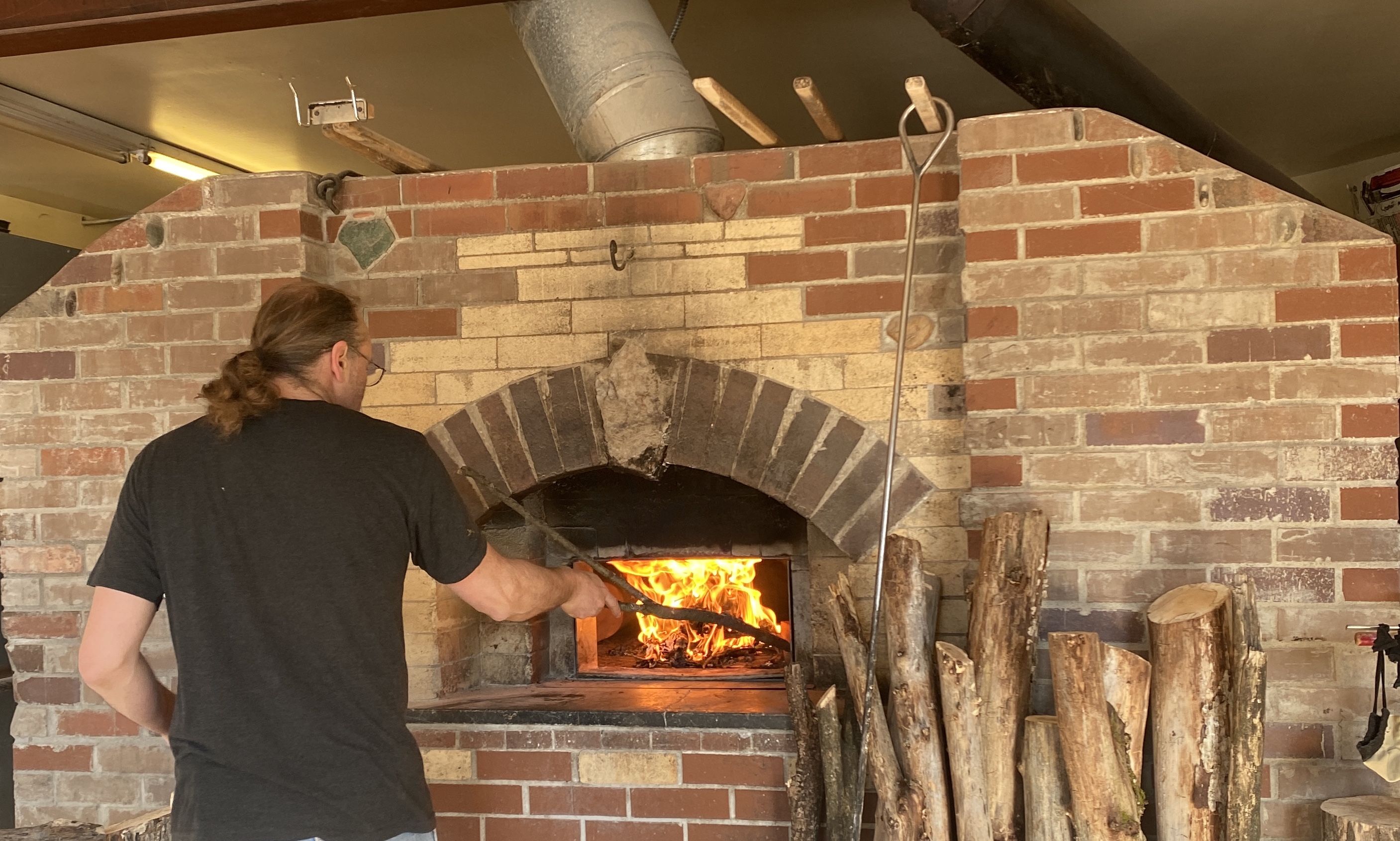 Jeff’s initial idea was to build a small oven behind the barn at Cress Spring Farm and occasionally bake bread for friends. It took a few years for his plans to ferment, and over that period the vision turned into a full fledged bakery.

Cress Spring Bakery has been making naturally leavened woodfired bread—and sometimes pizzas—from freshly milled flour for 25 years at their scenic rural location near Blue Mounds, WI. Though the process of sourdough baking and milling regional grains feels new to some, they were baked (forgive the pun) into this Wisconsin bakery from the start.

“The central focus of our business has always revolved around buying ingredients directly from local farmers as much as possible,” says Jeff Ford, founder and head baker. “We grew our own grains for a few years in the beginning before realizing that we were much better bakers than farmers. It's a lot easier to find local grains now than it was back then. With no internet, and no AGC, we had to just rely on word of mouth or try to meet people at farming conferences.”

It was really hard to come across information, Jeff says, both about mills that were available, and farmers who were growing grain. Dotted across the country, bakers gathered to meet about oven construction, and sourdough/whole grain baking. Watching people connect with each other along the grain chain now, sharing ideas and pushing food system concepts forward, echoes the connections he felt with people pursuing a new approach in North America in the 1990s.

Cress Spring is a part of what is sometimes called the American bread movement, better known by the kinds of breads such bakeries make: handmade, naturally leavened European-style, hearth-baked loaves with a hearty crust and loads of flavor. Like many such bakers, Jeff came to this career inadvertently. He learned to bake after dropping out of business school and getting hired by a collectively owned bakery that needed somebody who could do accounting. Working with Nature’s Bakery Cooperative, in Madison, WI awakened his fascination with baking bread and he dove into all parts of the process.

Jeff’s initial idea was to build a small oven behind the barn at Cress Spring Farm and occasionally bake bread for friends. It took a few years for his plans to ferment, and over that period the vision turned into a full fledged bakery. The farm was already serving as a yoga retreat center and organic vegetable farm, and a bakery seemed like a perfect addition to the community.

“My introduction to brick oven baking was going out to a baking conference in Berkeley, California and spending a day with Alan Scott. I fell in love with the concept and came home ready to build an oven” said Jeff. In 1996, Scott came to Wisconsin to build Cress Spring’s brick oven with him.

That first oven lasted thirteen years, through countless loaves, pastries, and pizzas, until it needed so much maintenance that an entire rebuild was warranted. As the bakery and pizza restaurant developed, Jeff established strong relationships with nearby farmers. The hard wheat and rye they use come from AGC member Driftless Organics, 75 miles away in Soldiers Grove, WI, which primarily farms vegetables. Small grains work well in their crop rotations, serving as a disease and pest break for the soil and plants. The farm is set up to grow, harvest, clean and store grains; they do so exclusively for Cress Spring because the bakery’s size matches their output. However, this does make the bakery susceptible to whatever happens in the field, and if there’s crop failure, they’ve got to turn elsewhere. They have developed a complementary partnership with nearby AGC member Meadowlark Community Mill, using their spelt, soft wheat, and bolted (sifted) wheat flour. Unfortunately, Jeff’s favorite grain, kamut, doesn’t grow well in the Midwest, so he buys it from farmers in Montana.

One thing that concerns Jeff about the current wave of grain work is the fascination with so called “ancient” grains, which he believes is a meaningless marketing term.  “If a variety of wheat is low yielding, falls over easily, lacks disease resistance, and is not profitable for a farmer to grow, then in the long run it's not profitable for anyone in the chain. To me, the variety of wheat is a starting point, but the local soil and growing conditions, milling technique, and fermentation and baking process are all equally important parts of the flavor and functionality of a bread,” he said.

In other words, awareness matters most. The people involved in the process have to pay attention along the way, from soil to loaf, and beyond.

That proved to be true in 2019 when Jeff almost stopped baking altogether. At that time, Cress Spring had grown into an unwieldy operation with a pizza restaurant on the farm, multiple farmers’ markets, 20 people on the payroll, and very little time for Jeff to actually be a baker. He decided to downsize significantly, closing the restaurant, only going to one farmers’ market, and doing much more of the baking himself. In addition to yielding a more sane way of life, this turned out to be more profitable than the larger operation. Addition by subtraction.

In addition to himself, Cress Spring now includes one full-time baker, and two part-time staff who help with pastry production and packaging one day a week. A friendly, rotating cast of characters helps sell at the farmers’ market and make home deliveries. This allows more time for Jeff to spend pursuing his current obsession, white water kayaking.

You can see Cress Spring’s offerings on their website and Facebook from the links below. And if you’re in the area, catch Jeff and Halee Wepking from Meadowlark Community Mill in a Grainshed panel discussion and film screening at Brix Cider in June.

You might also be interested in a look back at this 2009 article about Cress Spring Bakery in The New York Times Magazine.

Happy paddling, Jeff and Cress Spring—we’re glad for your engagement, the framework you helped build for farm to bakery connections, and your longevity!