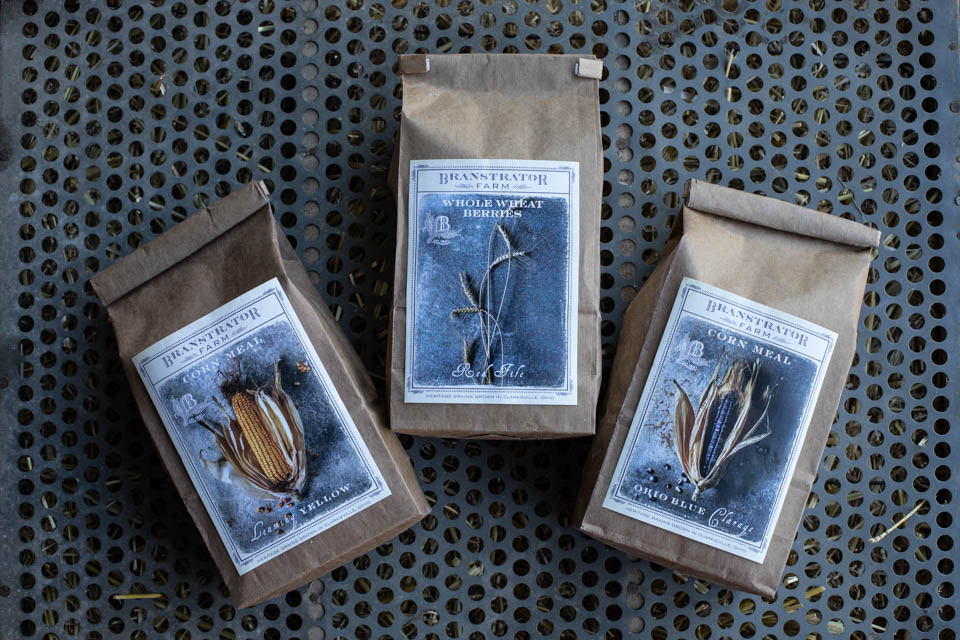 The fifth-generation caretaker of his family farm, Jon Branstrator is currently growing heritage varieties of grains and squash on 175 acres in Southwest Ohio.

The fifth-generation caretaker of his family farm, Jon Branstrator is currently growing heritage varieties of grains and squash on 175 acres in Southwest Ohio. He’s good at telling his farm story, evidenced by his recent features in an article about his collaboration with a local baker and a podcast about his farming and seed keeping.

“I think it's important to communicate what we're trying to do,” he said of the work of approaching food-grade grain farming, and farming in general, differently from conventional norms. He approaches this work from the soil up and from the culture up, trying to influence a land use ethic through example, sharing and teaching.

After the 200 years the farm has been in his family, Jon is actively imagining its future—one that doesn’t much resemble the input-driven agriculture his father learned. “After World War II my father went to Purdue University in Indiana, and they said to get rid of all your livestock, tear out your fences and plant corn every year.”

Years of heavy mechanical and chemical inputs meant that the drainage ditches filled with topsoil, and had to be dug out every couple of years. Herbicide-resistant weeds came, too. Jon wanted to do things differently, and grew some grain for local sale in the 70s, setting up a small mill in the barn to get flour to a health food store, and a pizzeria in Yellow Springs that made a whole wheat crust. But he couldn’t figure out how to blend his ideas with his dad’s, so he left.

During the 80s, Jon worked on hybrid corn and sorghum for small seed companies with winter nurseries in Central America. He still travels to Oaxaca each winter for more than a month, and thinks of his time away as a necessary reset, a way to immerse himself in cultures that are not his own. Similarly, he loves the learning and teaching he’s done in places as far away as Ethiopia. “We definitely don't have all the answers here,” Jon said just a few days off his latest trip, adding that traveling gives him a chance to look with fresh eyes and reimagine things. To build on his understanding of Indigenous growing practices, he is currently reading Zapotec Science: Farming and Food in the Northern Sierra of Oaxaca.

‍Jon came back to the farm in 1989 to take care of his mother who had ALS, but he didn’t start working there again until 1995, after his father died. Jon’s first venture was pumpkins and other produce, but growing and marketing these foods became more challenging. “I was thinking to myself, well, I could just grow commodities and take care of my soil, but Lord have mercy, I'm going to be bored. And then, the light bulb went off,” he said, and he remembered his grain plans. In 2019, he went to The Kneading Conference in Maine and to The Grain Gathering in Kentucky, and saw echoes of his ideas for regionalized grain systems back in the 70s.

“People had these grain chains going and I really admired them and wanted to be a part of them,” Jon said. He’s now trying to source equipment and talk to the people that run an incubator kitchen in Cincinnati to spur fresh tortilla making. Linking to people more broadly in the Midwest, through AGC, is important to him because he thrives on connections—making them and observing them, for instance, in the seeds he plants.

Last fall he put in a small plot of naked barley, which earns its name from the lack of hull on its kernels. The seeds were all different colors, and represent hundreds of breeding lines as a “population,” rather than a single variety. He’s equally excited about the Red Fife he’s been growing. It’s a heritage landrace wheat, meaning there is genetic variability that allows the wheat to adapt to a diversity of growing conditions. These plantings will evolve with climate change and develop a local terroir, mirroring the hopes he has for adaptation and cooperation amongst people, farming, and the land. AGC appreciates this thinking, and is glad to have Jon’s energy and experience in our network!

Stay in touch with Jon and his work using the links below: